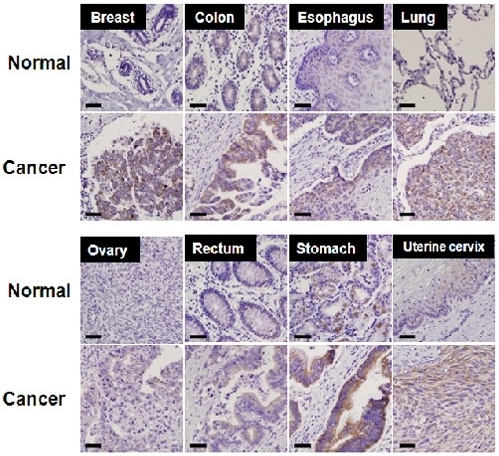 Chungnam National University said on March 30 that Park Jong-seon, professor of pharmacology at the university's medical school discovered for the first time in the world that 'LETM-01 protein' is a main substance that causes normal cells to change into cancerous cells.

In the academic community, 'LETM-1' was believed to be the protein that triggers Wolf-Hirschhorn Syndrome, which causes retarded physical growth, mental disorder, microcrania, Greek helmet-type face, ruptures in lips or the mouth, facial defect, and heart disorder.

Prof. Park's research team confirmed the destruction of normal cells by generating excessive volume of 'LETM-1.' The team found such necrosis triggers cancer by reducing the volume of mitochondria, which is an important micro-organ that plays key role in regulating energy metabolism within cells.

The study was published in the March 24th online issue of "Cancer Research," the most prestigious cancer journal of the U.S. and will be announced at the American Association for Cancer Research (AACR) meeting, which will take places in Denver in April.

Earlier, a preliminary basic study on biochemical mechanism of how LETM-1 functions within mitochondria was published in the January 9th online version of Cellular Signaling.

Currently, the fact that damage of mitochondria is a major cause of cancer and metabolic disease is a hot issue in the biomedical community, and a string of studies have been published. Prof. Park's team discovered for the first time that LETM-1 proteins integrate with 'MRPL36,' a mitochondria protein, and thus block mitochondria from generating energy.