Professor Lee Seung-jae at Pohang University of Science and Technology said on April 21 that his joint study with Prof. Cynthia Kenyon at University of California, San Francisco in the U.S. has found that thermo-responsive nerve cells in C. elegans, one of the poikilotherms, regulate changes in longevity in response to changing temperatures.

The study was published in the latest issue of Current Biology, an affiliate publication of Cell, a world renowned scientific journal.
Prof. Lee found in the study that polikilotherms die much sooner at high temperatures when thermo-responsive nerve cells are removed, and demonstrated that thermo-responsive nerve cells affect the longevity of such animals by changing the path of steroid signals.?
Lee's team found that the thermal response system of C. elegans represses the aging process at around 25 degrees Celsius, and concluded that such a system is similar to homoeothermic animals' body temperature control.

Prof. Lee said, "C. elegans' thermal response system tries to maintain the pace of aging even if the temperature increases," adding, "The study has shown that polikilotherms control their longevity by controlling responses to heat on their own."

Prof. Kenyon, a corresponding author of the study, said, "The study is an astonishing finding, which will result in the rewriting of the chapter on polikilotherms in high school biology textbooks."

Professor Lee plans to continue his study to find genes that regulate the pace of aging using C. elegans and how they operate, with a fund from the World Class University program supported by the Ministry of Education, Science and Technology. 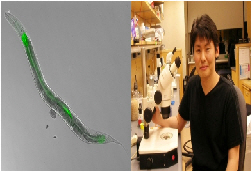