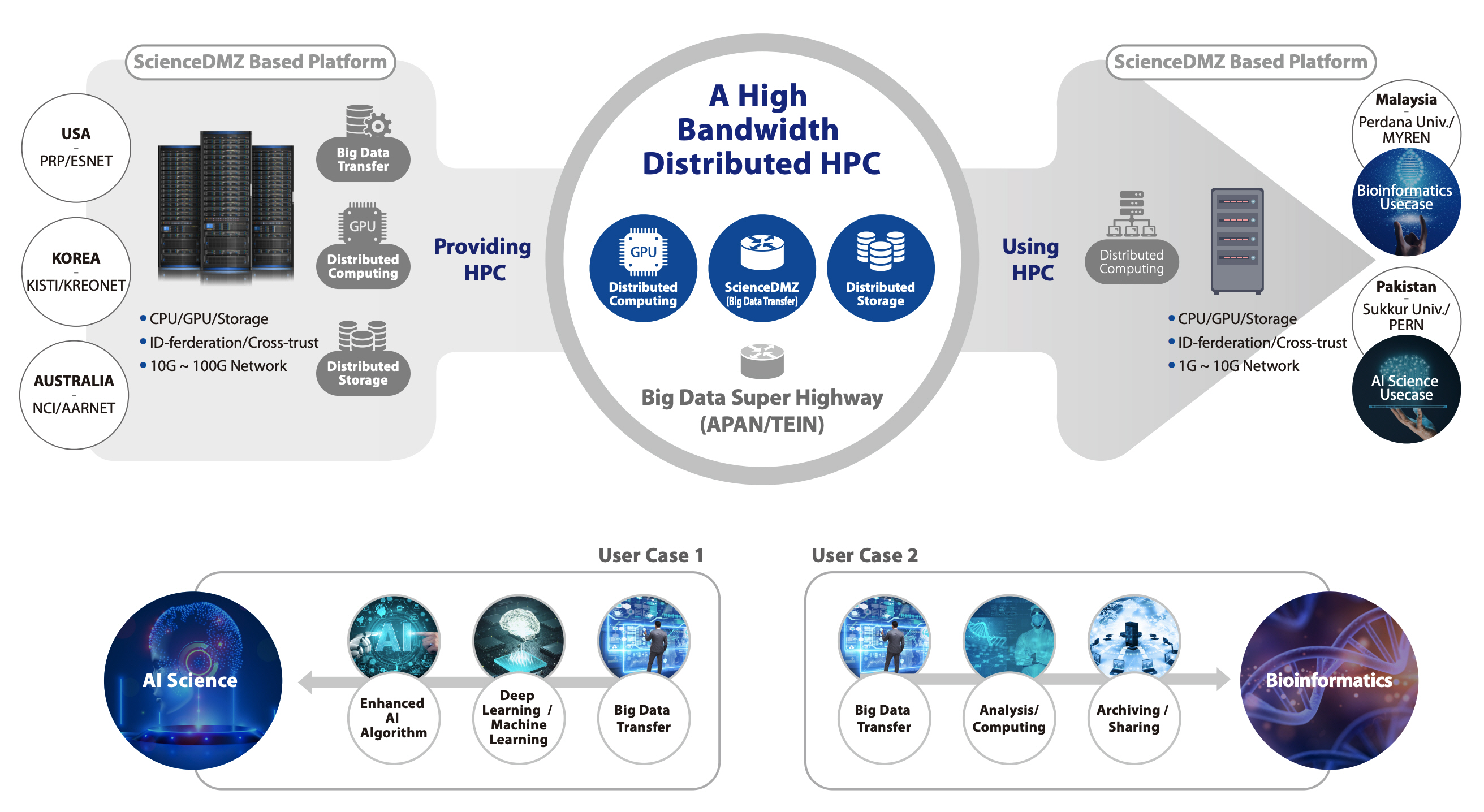 an establishment of ScienceDMZ, the Asian BigData Superhighway system,

and plays a leading role in improving international competitiveness

by advancing insufficient IT resources and infrastructure systems in Asia.

KISTI announced that it was selected as the organizer of Asi@Connect/TEIN*CC which is a remote providing project of distributed HPC resources. So that KISTI will start the project to build international research network superhighway with Australia, Malaysia, and Pakistan.

Asi@Connect is a representative Asia-Europe multilateral cooperation project that enhances research networks between the two continents by connecting with a Trans Eurasia Information Network(TEIN). Also the project's name was called from 2016 as Asi@Connect.

This project manages/supports network infrastructure that rapidly transmits large-scale S&T data such as telehealth, distance education, Eduroam*, and climate risk/disaster management research. Also it supports the establishment of research networks in Asia and its developing countries and bridge the information gap between regions. The project is operated with EU-centered finances and contributions from member countries.
* Eduroam(Education Roaming): Global Wi-Fi roaming service for research and education in higher education

This project applies intercontinental high-speed bigdata transmission technology through the ScienceDMZ*-based Korea Research Platform developed and operated by KISTI to four Asian countries, including Korea, Australia, Malaysia, and Pakistan. And with this base, it provides distributed computing resources-linked HPC environment to Asian developing countries for attempting an HPC-driven applied research. In the future, KISTI's 5th national supercomputer Nurion's resources will also be linked and utilized.
* ScienceDMZ: A networking technology for high-speed transmission of big data, and it awarded by the Ministry of Science and ICT of Korea as one of the top 100 R&D researches(2020)

Malaysia and Pakistan, which are selected beneficiary countries of the Asi@Connect, commented they will receive data and HPC resources for bio/AI research through the high-speed transmission infrastructure and high-performance distributed computing platform that will be built by the project.

KISTI has led the APRP Working Group*, which studies the Asia-Pacific research platform for a joint research on high-speed networking technology with Asian countries. Through this selected project, the existing research level will be applied to 4 countries, so that the research level will be improved to the realization stage. Also KISTI will play a role in enhancing the global status of the Korean S&T research network.
* APRP(Asia-Pacific Research Platform) Working Group: Asian countries-centered non-profit research cooperation for high-speed network-based high-performance platform technology

Moon Jeong-hoon, chair of APRP Working Group said, "This project provides the insufficient HPC resources in Asian developing countries, while promotes technology cooperation, through the combining high-speed networking technology and distributed computing technology. Accordingly the project will play a role to enhance the IT field leadership of Korea."