KISTI held a 60th anniversary ceremony of its foundation 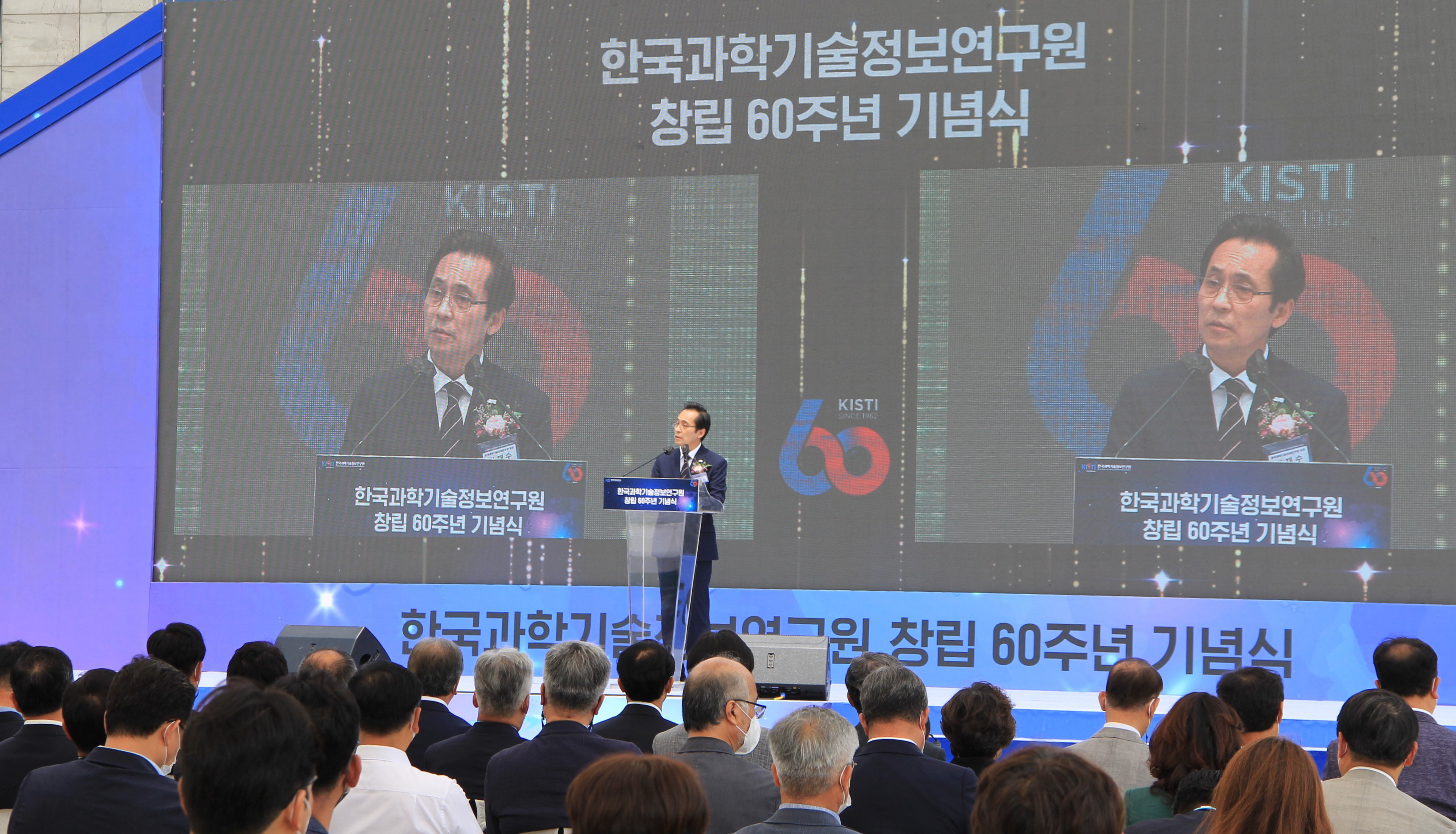 KISTI held a ceremony of the 60th anniversary of its foundation at KISTI Daejeon HQ on June 9th. KISTI, which began as Korea Science & Technology Information Center(KORSTIC) in 1962, was launched in 2001 by integrating Korea Institute of Industry and Technology Information(KINITI) and Korea Research & Development Information Center(KORDIC). At the day, Oh Tae-Seog, the 1st vice minister of Korean Ministry of Science and ICT, Lee Sang-Min, the national assembly member of Korea, and Kim Bok-chul, the chairperson of National Research Council of Science & Technology of Korea, attended the ceremony.

Starting with the DDS(Document Delivery Service) in 1962, KISTI has laid the foundation for the establishment of a national S&T data platform, including the Korea's first online information retrieval service in 1978 and the implementation of Hangeul(Korean language) searching service in 1985. In addition, regional information centers were built near the seats of city halls and provincial governments to promote a business supporting. In 1988, KISTI introduced the National Supercomputer No. 1(Cray), and also in the same year, the KREONET, a national S&T research network, was established to set a infrastructure for the R&D cooperation beyond the constraint of space.

From 2001, KISTI was selected as an institute dedicated to establish a management and distribution system for S&T information, and in 2005, KISTI opened a network-based information protect service and expanded its cyber security infrastructure through the forming of Science and Technology Cyber Security Center to secure the security of goverment-funded institutes. In addition, it was appointed as a general managing institute of National Science & Technology Information Service(NTIS) in the same year. Through this, KISTI could integrate, manage and serve the national R&D data from all ministries. NTIS was awarded UN Public Service Award in 2012, and it also was exported its technology to Costa Rica to build their own R&D management system.

In 2009, Association of Science and Technology Information(ASTI) was launched to construct an industry-academia-institute knowledge ecosystem for supporting regional SMEs which is suffering to commercialize R&D technologies. As of december 2021, ASTI had 15 regional organizations under a nationwide one and about 13,000 members. And they held a national conference and knowledge forums every year. In the DX era, KISTI also has been promoting a DX-ASTI strategy for supporting all ASTI members' digital transformation.

Also in 2018, KISTI introduced the 5th national supercomputer, NURION to provide world-class supercomputing infrastructure for Korean researchers.  On the other hand, for strengthening S&T data platform system, S&T knowledge infrastructure service(ScienceON), national research data platform(DataON), national open access platform(AccessON) was built. Through this, KISTI has been solidifying its position as the CDO.

In the era of DX, KISTI is linking and cooperating S&T data, supercomputing, and intelligent information analysis infrastructure through the STI ecosystem which is established over 60 years. With constructing a S&T data dam, KISTI set a foundation for the AI linking and convergence of S&T knowledge resources. Also KISTI is leading the change of R&D trends in S&T DX for transition to digital economy through the establishment of quantum cryptographic network infrastructure and the cloud transformation of S&T information service. In addition, KISTI use the data to solve national pending issues like early flood warning, fine dust reduction, public transportation optimization and earthquake damage prediction. Moreover KISTI is driving the development of future agricultural data farms, global supply chain monitoring, and audio data utilization technology.

At this day, Oh Tae-Seog, the 1st vice minister of Korean Ministry of Science and ICT praised efforts and achievements during 60 years and said, "KISTI, which has accumulated capabilities in S&T data and digital platform field, has to play a key role in leading S&T innovation and the digital transformation."

Kim Jae-soo, president of KISTI said, "From the foundation of 1962, the ultimate goal of KISTI is to make Korea a world power through S&T innovation. As a national research institute of S&T data, KISTI will contribute to strengthen the S&T hegemonic competitiveness of Korea through opening the open science era, developing global super-gap computing technology, establishing intelligent data convergence analysis system and supporting S&T DX. We will do our best to promote the happiness of people and serve as a key institute of national S&T research beyond future 100 years."